Snickers ‘You’re not you when you’re hungry’: best global brand campaign ever?

Research for a recent brand vision project highlighted what is perhaps the best global brand campaign ever: ’You’re not you when you’re hungry’, by Snickers. We tipped the campaign for the top early in its history, back in this 2012 post. Since then its has run for an impressive six and a half years in an amazing 58 markets. Global brand sales of the billion dollar brand have grown by 15.9% and the work has won many major effectiveness awards, including two Effectiveness Lions and an IPA Gold.

We explore the Snickers case study in detail on our Mastering Brand Growth program on our brandgym Academy online training platform here. In particular, we use it to look at how to find a universal insight that appeals to a core target AND a broader audience.

Below I share some of the key success factors of the campaign, base on an excellent case study by James Miller (1), global head of strategy for Mars at BBDO.

Mars was an early adopter of Byron Sharp’s work, focusing Snickers on penetration to attract more buyers into the brand. This meant creating a distinctive communication platform that could drive salience for Snickers, attracting new buyers and reminding lapsed buyers about the brand. The platform to work needed to enable building of distinctive brand assets across all touchpoints.

Driving penetration means being salient and immediately recognisable among a broad audience. The ambition is to achieve what Peter Field of the IPA calls ‘brand fame’: building word-of-mouth advocacy that gets the brand talked about.

However, Snickers had become ‘over-targeted’, using ‘blokey’ humour to focus exclusively on the niche of young men. The team needed to remember what made Snickers famous, keeping masculine appeal, but refresh it to broaden the brand’s relevance. “We needed to tell a guy’s story in a more universally appealing way,” explained James. “We needed to be less like ‘Jackass’ and more like ‘Knocked Up’, (creating) an iconic US brand with wide appeal, like Budweiser, Jeep or Levi’s.“

3.Match a human truth with a brand truth

The team carried out research to identify a ‘universal’ human truth that worked across markets and so could help build a global brand. They discovered that guys seek acceptance and membership of the “male pack‟, and that when they’re hungry, they’re not themselves and their place is the pack is threatened. This insight around male belonging was consistent with the brand’s heritage, whilst also being relevant to a much broader audience..

Snickers had a brand truth to respond to the human truth about what hunger does to you: a substantial, nut-filled bar that has always been known for satisfying hunger. The resulting brand idea was, “A proper, nut-filled Snickers sorts out hunger and restores your role in the pack”.

Perhaps the most impressive aspect of this story is how the brand team and their agency, BBDO, exported the campaign to so many markets. Global brand campaigns really ignite when local teams not only adopt them but are inspired by them to create brilliant local executions, as we’ve seen first-hand on global strategy projects for brands like WD40 and Castrol.

Different markets gave their own spin to the global campaign, to give it cultural relevance. In each case, good old TV was the most important launch media, being the best ‘rocket launcher’ for generating fame: 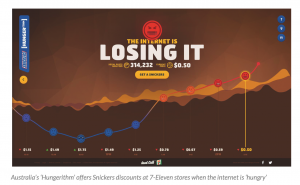 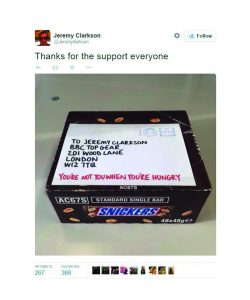 5.Use a ‘success virus’ to spread the campaign

As the global brand campaign proved itself in initial markets, ‘the success virus’ kicked in. Local marketing directors began to believe in the campaign and the brand as a whole:

Mars drives efficiency and boost effectiveness on an ongoing basis. “If work has a positive impact in a market, we continue to invest in it. If not, we withdraw the work and back previously proven work instead,” explained the company.

Mars and BBDO have built on the success with brilliant local work and gone a step further with a truly global campaign featuring Mr Bean, which has already run in 60 countries. This delivers economies of scale but also what we call ‘economies of ideas’: pooling resources to create a campaign that is bigger, bolder and better executed than any country could do alone.

In conclusion, The Snickers campaign is a brilliant example of creating a big, compelling global brand idea with universal appeal, matching a human truth with a brand truth, and executing it in a distinctive and locally relevant way.

As mentioned at the start, we explore the Snickers case and many others on our brandgym Academy platform. If you’d like more info on the program, simply pop your name and email in the form below.