A email inviting me to sign up to a new car-booking called Kapten grabbed my attention this week. Kaptain is one of several new ‘insurgent’ brands launching in London this year looking to steal share from Uber. Revenue growth of the embattled market leader  has already stalled in the face of increased competition(see below), with the company losing $1billion in the first quarter of 2019 alone. The flurry of new market entrants looks likely to add to Uber’s woes, making it even harder for them to reach profitability. 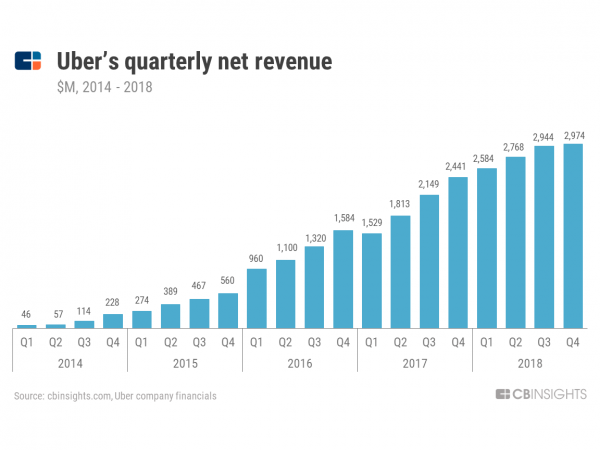 In this post we explore why Kapten can capture share from Uber. The company, formerly known as Chauffeur Privé, launched in France in 2012 where it has become the number two car-booking app with 2m users, behind only Uber with 3m. And the company has ambitious goals for London, aiming for 1.5 million users by 2021. “There has been one dominant, overconfident ride-hailing player in the field and it’s time to shake things up. We believe London deserves better,” proclaimed Kapten general manager Mariusz Zabrocki (2).

At first sight, Kapten does has some distinctive service features which encourage me to try it as alternative to Uber. First, you get a fixed price on ordering, not the range of prices in the Uber app. Second, Kapten’s standard price seems to be well below Uber, at least for the moment, and is made even more attractive by a launch price promotion (see below). There is also a loyalty scheme to reward regular use of the app. 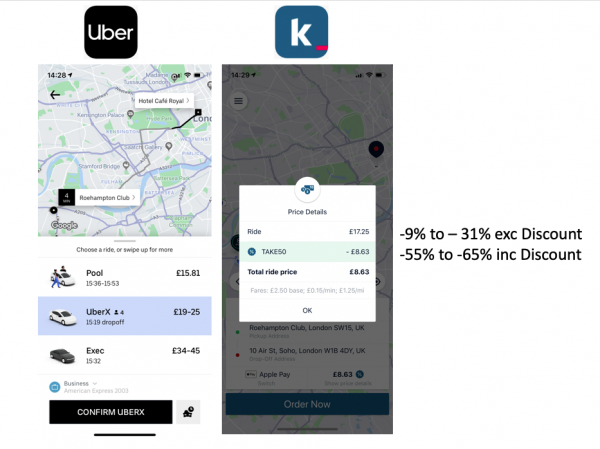 Attracting the right number and quality of drivers is also critical to success, and here Kapten has a chance to benefit from the well publicised discontent of many Uber drivers. Kapten says it will initially sign up 5,000-10,000 drivers for the London launch, compared to c. 45,000 who drive with Uber (3).

Initial incentives include 0% commission for one month, payment of the congestion charge during 2019 and bonus payments during peak hours (4). However, the true challenge for Kapten is the longer term relationship it can can build with its drivers. This relationship uses “an inclusive, personalised, and respectful approach,” according to co-founder and CEO Yan Hascoet (4). Time will tell what specific services the company will provide to create this.

3. A nicer brand of emotional “sizzle”

Kapten is using a light-hearted, friendly tone-of-voice to add some emotional sizzle to stand out. It feels like it is positioning itself as ‘the nice guy’ versus the big, bad bully of Uber. The launch billboard ad campaign takes a direct shot at Uber for avoiding local sales tax: “Others avoid paying VAT in the UK – that’s not uber cool.” In contrast, Kapten says it pay taxes locally in every market in which it operates. 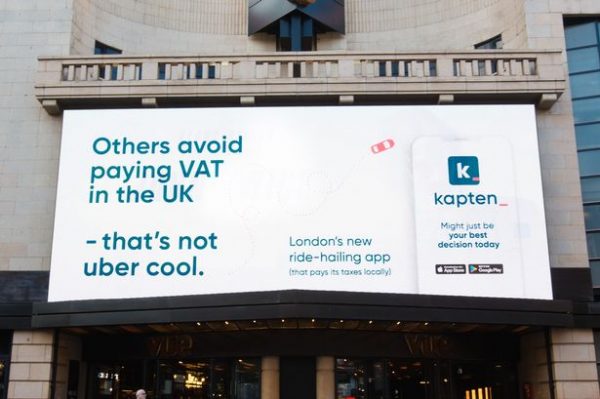 The Kapten app icon uses the ‘K’ symbol to be clean, clear and impactful. It stands out well on a mobile phone compared to Uber, which has gone through a series of ill-informed changes, losing the visual simplicity it has back in 2016 with the ‘U’ icon, as we posted on here.

5. Focus on the core

Kapten seems to be single mindedly focused on car-booking, which should help it build share versus Uber, who is spreading its financial and human resources over a multitude of ventures, each with its own set of competitors. This stretching beyond the core has taken it into food delivery, autonomous driving and “daily air transportation” with Uber Elevate.

A final important factor in Kapten’s favour is the big brand backing behind them, with Daimler a lead investor. This has benefits in terms of investment, with Daimler having invested tens of millions of euros according to the company. In addition, Kapten can also benefit from Daimler’s expertise and consumer insight. “Having a shareholder with a long-term vision allows us to invest in areas like devising incentive schemes and benefits to attract drivers,” observed Hascoet (5).

In conclusion, the distinctive service, tonality and identity of Kapten along with the attractive pricing policy suggest to me that the brand can capture a decent share of the car-booking market in London. And the backing of Daimler should means it should have have the stamina to slug it out against Uber and the other brands entering the market.

We’ll check back in the future to see if the company has achieved its ambitious targets!