John Lewis’ Xmas ad: a gift that gives less to the brand

Retailer John Lewis has lost its title as undisputed champion of Xmas advertising, according to System 1 research on this year’s ad (1), starring Elton John. The brand only just made the seasonal top 10, with a 3-star effectiveness rating, falling below 4-stars for the first time in several years. These ratings are based on “emotion into action”: effectiveness at creating emotions likely to turn into action that drives sales.

Below I suggest reasons for this apparent decline in emotional impact, and also why the ad might be less easy to amplify in store to sell more stuff.

1. Elton is the star, not the brand

The real star of the 2018 ad is not the gift giver, or even the gift itself, it is Elton. He has helped drive good growth in awareness, according to YouGov (2). However, as System 1 reports, “John Lewis was criticised for advertising its star, not itself – sentiment echoed by some of our viewers.” This focus on a character, not the brand, reflects a change of strategy in 2016.

In the six years from 2010 to 2015, the seasonal story was consistently “Give a little more love this Christmas, by shopping at John Lewis for your gifts”, as I posted on here. This focus on the gift-giver and their joy, talked directly to the potential shopper. It also made the ads distinctive, as most Xmas ads  focused on the gift receiver, or the gift itself. 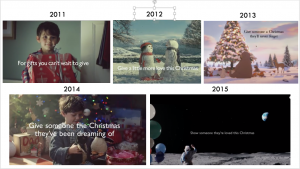 Freshness each year came from different characters, but always with a consistent narrative including a tear-jerking finale and acoustic music. The brand consistently grew share during this period, achieving 4-star ratings in System 1 testing and also strongly building awareness and word-of-mouth in YouGov polls. This period was also one of strong brand share growth, with the communication playing an important role, as shown in the analysis below from the IPA (apologies to email newsletter readers if the graph is blurred). 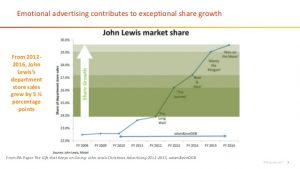 However, in 2016 the emphasis shifted, with the focus seemingly on the gift, not the gift giver, based on the end-lines  (see below). But the focus was really on a supporting character:  Buster the dog in 2016, Mosh the monster in 2017 and Elton in 2018. This shift, I suggest, makes the communication less relevant to the potential shopper, and also less distinctive. 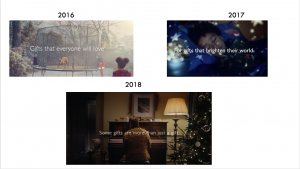 2. Gift giving in the past, not the present

The ad winds back in time, to show us how the gift of a piano started Elton on his road to stardom. I assume this twist was added to try and freshen up the format. However, the downside is that we end up seeing the gift being given back roughly 65 years ago, in the 1950s. This feels somehow less relevant to me than a story set today?

The nostalgia trip, coupled with the choice of a 71 year old popstar, also risks making the brand feel a bit dated, based on feedback from the Taylor teenage girls and their friends!

This year’s campaign also feels weaker in terms of opportunity for in-store amplification, and a direct link to selling more stuff. A search online brought up a couple of t-shirts inspired by the TV advert. Both are reduced to clear, suggesting they haven’t been a hit! A search for ‘piano and John Lewis’ did bring up some results, but nothing linked to the campaign, which seems like a missed opportunity.

Contrast this with the 2016 campaign featuring a little girl and the man in the moon. This presented multiple opportunities for in-store amplification, including window displays, events and merchandise. 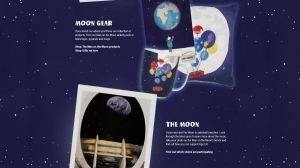 The 2014 campaign, featuring a little boy and Monty the Penguin, was also a gift that gave generously in terms of merchandise opportunities. The ad impacted on popular culture, with sales of penguins on eBay jumping by 300%! 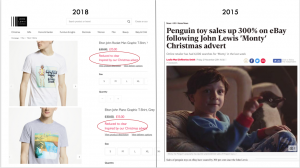 4. Blowing a bundle on Elton

I also wonder how smart John Lewis is to burn a reported £5million on Elton John (3), whilst giving a much lower bonus to the Partners in its stores. The 5% of salary paid out in Jan 2018 was the lowest level in 63 years, following a 77% drop in annual profits (4). It will be interesting to see what the 2019 bonus is, and how Parters react knowing that Elton got a multi-million pound Xmas present.

In conclusion, I suggest the John Lewis 2018 Xmas campaign shows the risk of having too much freshness, and not enough consistency. The brand has walked away from a winning Xmas campaign formula that used a consistent narrative based on the gift giver and had executional elements that were easy to amplify in store.

Let’s see if John Lewis reaches the same conclusion and remembers and refreshes what made it famous for the 2019 campaign….

In the meantime, click below to watch my favourite 2018 Xmas ad, from Heathrow, a 4-star commercial that is Nº one in System 1’s Xmas 2019 rankings (5). It uses a distinctive brand property for the 3rd year in a row, in the shape of their elderly bear couple, showing the power of fresh consistency.