One solution to skipping is the ‘unskipppable’ six-second ad format. Research suggests that these ‘snackable’ videos are more effective than skippable 15 second ads (see below). If most people only watch a YouTube ad for 6 seconds, why not create an ad with this habit in mind?

However, this  super-short format is a creative challenge. Below we explore learning from some of the strongest performing 6 second ads in a Google survey (3). 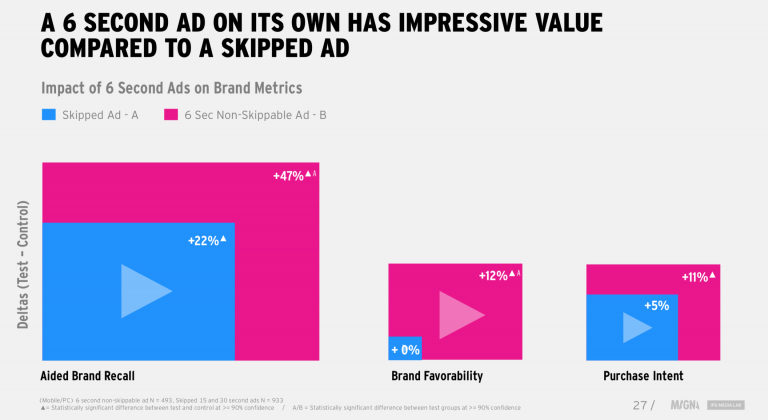 1. Clarify the role of the six-second ad, like Doritos

“The key to effective six-second ads is to stop thinking of them as a cutdown and instead see them as part of a larger campaign,” suggests Justin Pahl of AMV BBDO. He explains how rather than being an afterthought, 6 second ads need a clear brief showing how they add an extra dimension to a campaign. “Whether someone saw all elements of the campaign or just the six-second ad, it should be an entertaining and meaningful experience,” he says, using the agency’s six-second ad for Doritos as an example.

Clearly the six-second format means you need to tell a simple and compelling story, fast. Gorilla Glue is a good example of this, showing something broken and in need of fixing and then Gorilla showing up with a solution. “The moment of consumer need is relatable and visual, so we don’t need a long format to set it up,” explains Lauren Connley, the brand’s Senior Director of Creative. Gorilla Glue also shows how a distinctive visual brand property is especially powerful in six-second ads, helping explain why this format has generated as much brand lift as longer format ads for them.

Having the right message at the right time is especially important for six-second ads, where you have little time to make you mark. Rice Krispies Treats successfully used this approach to release festive-themed products in the run-up to the holiday season, dedicating 90% of online video spend to six-second ads. “We found that when our six-second ads are contextually relevant, we can break through the noise,” explains Associate Marketing Director Emily Minardi.

In conclusion, six-second ads can play a key role in online video campaigns, provided they have a clear role, tell a simple relevant story and are delivered at the right time.

They also require more creative juice, not less. “You have to understand your medium and production tools so much more intimately,” pointed out Maud Deitch, formerly of Mother and now at Instagram, during a You Tube challenge to create impactful six-second films such as the one she worked on below. (4)