Bringing to life a vision: ’Housing Britain’ by the Prince’s Foundation’s

Today I found inspiration on bringing to life a brand vision from an unusual source: Housing Britain: A Call to Action from The Prince’s Foundation, whose leader is Prince Charles (1). The report is ‘a blueprint for planners, builders, landowners and government’ to help solve Britain’s severe housing crisis, and was covered in an article in The Times (2).

Housing Britain builds on learning from two successful, real-life communities already created by The Prince’s Foundation. The first town, Poundbury in Dorset (below), was created in the 1990s and has proved early critics of its ‘its period-pastiche aesthetic’ wrong. It has 1,700 homes commanding a c.30% premium over similar nearby houses and has created 2,300 jobs in 185 businesses that add £98m a year to the local economy.

The prince’s newest town is Nansledan, dubbed ‘Surfbury’ owing to its location on the Cornwall coast. The plan is for 4,000 homes over the next 30 years, with 230 already built and sold.

Below we look at how the prince’s vision combines the three elements in our ‘Triangle of Truth’ (Cultural truth, human truth, brand truth) and then brings this to life to inspire and guide stakeholders. 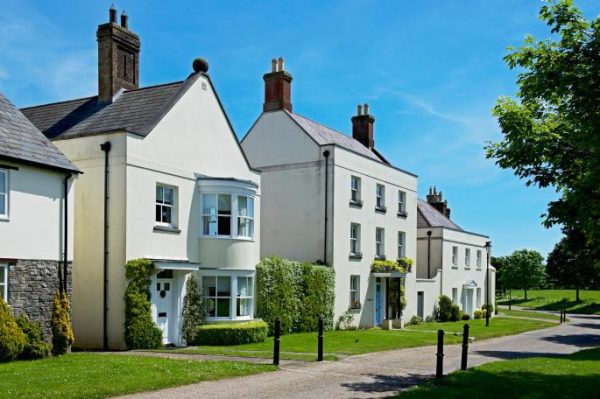 1. Tap into a Cultural Truth

Any brand vision should tap into what is happening in broader culture, beyond the narrow market in which you are operating. Housing Britain taps into a major cultural issue in the UK today. Housing supply is failing to match demand: we need an estimated 300,000 new houses a year, but construction has been around half of that over the last decade. This has pushed up prices and made it much harder for young people to buy their own property (see below).

Excess demand has pushed up land prices. And the highest bidders are often ‘volume’ house builders who seek to recoup their investment by building as many houses as possible, reducing infrastructure provision, compromising on build quality and pushing up prices. The result is ‘the same old cheap boxes on the edge of towns,’ says Ben Bolgar, senior design director for the Prince’s Foundation. This in turn reduces the desire of existing communities to have such unattractive developments built near them, summarised as ‘NIMBY’ for ‘Not In My Back Yard’. 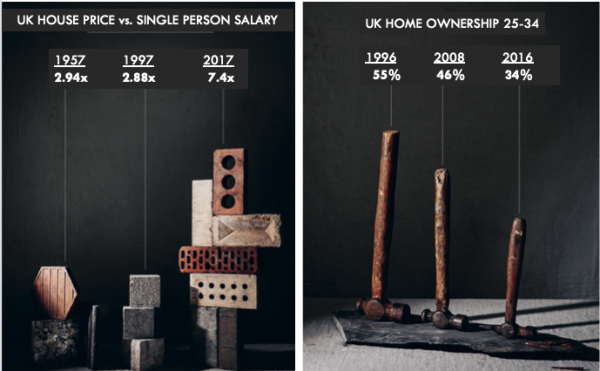 The Prince’s Foundation used immersive insight to understand in depth what local people wanted from housing, to ensure it was relevant. ‘It’s been crucial to involve the local community,’ states the report. ‘People love to tell you about their place and if you respond to their suggestions with housing they like, when they see it built it is immediately popular.’

The resulting design might not be to the taste of trendy architects and designers, who say that Nansledan feels ‘a bit Toytown, Stepford Wives or The Truman Show’. However, as the Times articles suggests, ‘Given the choice, most buyers would rather live in a pretty model village that’s full of life and thoughtfully designed than in a drab identikit estate.’ 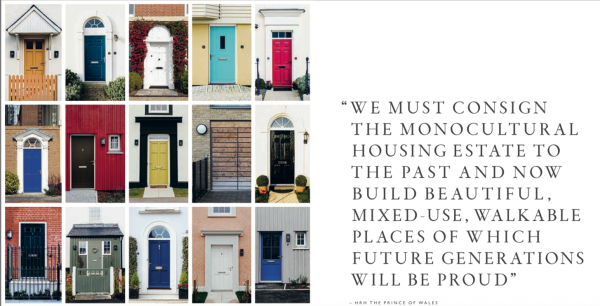 The Prince’s Foundation have created a new and distinctive type of housing that people want to live in. ‘Nansledan already feels like a real English village, not a housing estate,’ reports The Times. Distinctiveness has been ‘built in’ to the town in several ways: 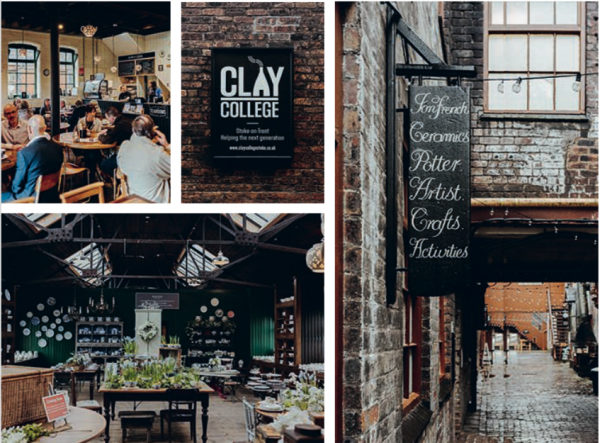 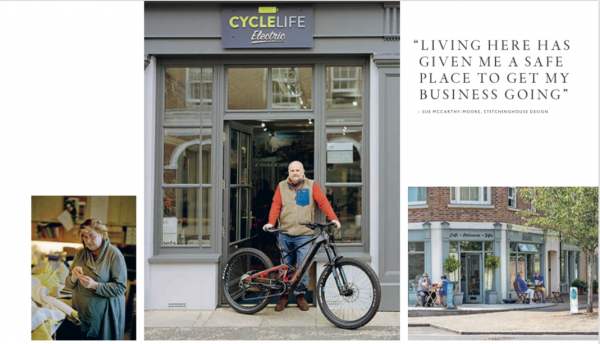 4. Bring the vision to life

The Prince and his foundation team have brought their Housing Britain vision to life in a couple of ways. First, the key points from the approach are summarised in an inspiring manifesto. My suggestion to make the manifesto even more effective would be to reduce the number of points from 14, which is a lot to remember. Below I’ve taken some of the key points and grouped them under five themes that capture Prince Charles’ vision in his introduction to the report:

Communities that prosper have walkable, mixed-use neighbourhoods with a range of local services and integrated affordable housing. They also need natural places that are enjoyable and safe for cycling, and, above all, a local identity that fosters pride and a sense of belonging, with character and beauty.

Second, and even more importantly, the Prince’s Foundation have created in Poundbury and Nansledan prototype ‘products’ to allow them to ‘test & learn’. This means that Housing Britain is much more than simply a theoretical concept, it has real-life learning and a solid business case behind it. 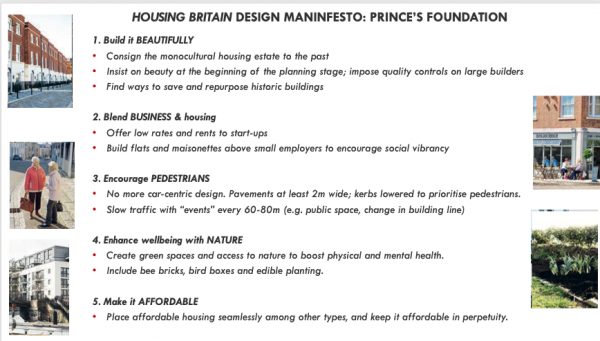 A final part of Housing Britain that stood out for me is the innovation it suggests on the business model for building communities, to get round the problem of upfront pricing.

The communities suggested in the manifesto take time and investment to build, so land owners would probably get less money upfront by selling to such a development versus selling to a big house builder, who would build quickly and cheaply to maximise profits. The pilot developments in Poundbury and Nansledan got round this problem by being built on land owned by the The Duchy of Cornwall, the estate of the Prince of Wales. But how can small and medium builders that pride themselves on quality and craftsmanship compete?

Housing for Britain proposes an alternative model: the landowner sells for a lower upfront price, but in return gets a percentage of each home sold for years or decades, at every phase of the scheme. ‘The way we do it is more profitable, it just takes longer to get there,’ explains Ben Murphy, estate director for the Duchy of Cornwall. ‘A PLC housebuilder might offer you £30m upfront. A local small builder can offer only £20m. But by getting a percentage of the sale of each home, you could get £60m-£80m over the scheme’s lifetime.”

In conclusion, Housing Britain in an inspiring example of how to combine a cultural, human and brand truth to create a distinctive proposition, and then bring to life the vision using a manifesto and a prototype product. I have on my summer to-do list making a trip to Surfbury soon!