Impressive results for the Apple Watch caught my eye this week, with the brand winning a 54% global share of smartwatches in Q1 2019, with sales growing at c. 20% (1). It is four times the size of the closest competitor, Fitbit. Apple’s wearables business, of which the watch is a key part, has now reached the size of a Fortune 200 company (2).

Here, we look at some of the success drivers for Apple Watch, several of which we covered in this post back in July 2015. At the time, analysts were disappointed by the product’s launch quarter, with a 7% share price drop on news that “only” c. 2.5mill units had been sold, below Wall Street’s expectations. We were more positive, predicting it would grow strongly and sell c. 14 million units in calendar 2015, close to the actual sales delivered of c. 13 million.

One success factor we posted on back in 2015 is that Apple’s watch was just that, a beautifully designed and distinctive watch, from Apple. The function people said they’d use most in pre-launch testing was, you guessed it, checking the time.

In this way, Apple was able to take share from the total watch market, not just from other direct competitors. And boy has it succeeded, with Apple Watch sales surpassing those of the whole Swiss watch industry! (3)

Other so called “smart watches” that had been on the market longer, such as Fitbit, had functionality but didn’t look that cool as a watch.

Just as a watch, forgetting all the functionality, we suggested that Apple Watch was a compelling value proposition compared to brands such as Citizen selling in the same £300-£400 price range. “What would you rather have under the Xmas tree in 2015, a Citizen or an Apple Watch?” we asked. 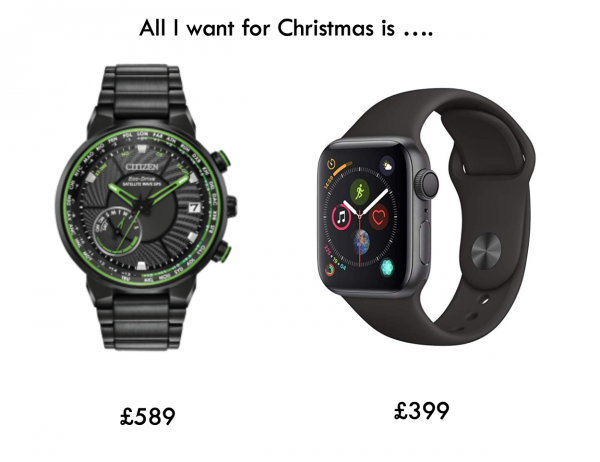 A second driver of success we predicted in our original post was the power of the Apple ‘ecosystem’. In the launch year there were already 8,500 apps available and the number on offer has continued to increase.

In addition, the watch has functionality that works seamlessly with other Apple products. The watch can unlock your Apple Mac computer. And it can change the tracks or volume when playing music on your iPhone.

Finally, Apple has been able to harness their online and physical retail channels to present and demonstrate the product.

As with other products like the iPhone, Apple has launched wave after wave of rejuvenation to create ‘fresh consistency’ and maintain interest (4):

Series 3: freedom to take a call, stream music, interact with Siri and more, without the need to have your iPhone nearby

One thing we got wrong back in 2015 was thinking that this constant rejuvenation would be less relevant than on the iPhone, as people wouldn’t want to keep upgrading their watch. However, the Apple Watch improvements have worked not by driving upgrades, but rather by driving penetration: three quarters of  sales in the latest quarter went to first time owners (2).

In conclusion, the success of Apple Watch shows the power of combing beautiful design that works in an ecosystem of products and services, with constant rejuvenation keeping the offer fresh to drive penetration.

To further explore brand stretching check out this other post.

To explore brand stretch in depth we offer a short, on-demand course on our brandgym Academy platform here. The course is only £95+VAT and is fully refunded if you go on to take the full Mastering Brand Growth program.