Should you take a social stand like Ben & Jerry’s?

Ben & Jerry’s doesn’t just whip up tasty ice cream, it also whips up media storms by campaigning on social issues. The latest controversial Twitter campaign challenged the UK’s home secretary Priti Patel over the government’s strategy to stop the flow of migrants across the English Channel. This provoked a headline-grabbing Home Office response defending Patel, saying that if the strategy upset “a brand of overpriced junk food then so be it”. 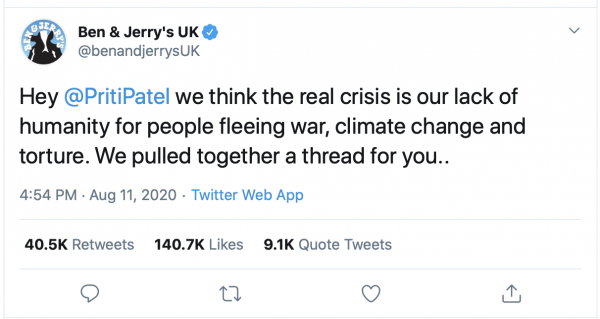 The campaign seemed to be effective from a brand standpoint, with higher consideration (+10.6 pts), purchase intent (+3.5 pts) and word of mouth (+13.3 pts) in the week after the activity according to Marketing Week (1). More impressive and important is the longer term growth Ben & Jerry’s has achieved with its three-part mission (social + product + economic) including three decades of campaigning on social issues. Since the purchase by Unilever in 2000, sales have grown almost 500%, from $237million to $1.2 billion.

So, should you follow the example of Ben & Jerry’s and take a potentially polarising public stance on social issues?

1. Should you have a social mission?

Defining a clear social mission can make your brand more relevant for both consumers and employees. Two thirds of consumers were willing to pay more for products and services from companies committed to positive social and environmental impact, according to a Nielsen survey (2). And brands with a demonstrated commitment to sustainability had average sales growth four times that of brands without demonstrated commitment (+4% vs. +1%).

A social mission is also increasingly important for employee engagement, with 51% of people saying that a sense of social purpose is “essential/very important” for their ideal job in a survey of nearly 2,000 students and college-degreed workers (2). BP’s recent commitment to “cut greenhouse gas emissions to net zero by 2050, or sooner” was partly driven by the need to attract and retain talent. “We would have struggled to hire the people we’ve hired into BP in the past six months had we not [changed direction],” explained CEO Bernard Looney (3).

2. What role should your social mission play?

When working on your social mission, a critical question is the role you want this mission to play (see table below).

In some companies, social action is limited to being part of a corporate social responsibility (CSR) program, typically led by a CSR team. This helps protect the business from negative PR, which is important given that 30% of the value in any company can be at risk from consumer backlash or regulatory pushback, according to research in a Deloitte report (2).

At the other extreme are ‘activist brands’ where a social mission is central to the brand purpose: the reason to BE. Ben & Jerry’s is such an brand, with its purpose To create euphoric ice cream concoctions made with wholesome, natural ingredients whilst campaigning for climate, environmental and social justice, summed up beautifully with the brand idea, Joy for the Belly & Soul. Clothing brand Patagonia is another example of an activist brand, campaigning to protect the environment. Being an activist brand can pay off, as shown by Ben & Jerry’s. However, this involves massive and long term commitment to a cause, as we will see below.

Somewhere in the middle is where we suggest most brands should operate. Here, social mission is part of being a purpose-led brand that has ‘a positive and distinctive role in improving everyday life’. For example, another Unilever brand, Axe, sharpened and updated its brand purpose to be Helping guys celebrate their individuality and be as attractive as they can be. The purpose remains anchored in the historical territory of making guys feel and smell good, whilst updating it to be less ‘laddish’. A social mission related to male mental health is part of delivering the purpose, via a partnership with the charity CALM (Campaign Against Living Miserably). Corona is another example, with its campaign to clean up beaches part of delivering its brand idea, This is Living and its brand world of laid back beach life, as we posted on here. Note how the tone Corona’s campaign is inspiring and engaging, rather than polarising and provocative like an activist brand.

Sustained, substantial actions led from the top are needed for a social mission to be effective, especially if you have ambitions to be an activist brand like Ben & Jerry’s:

In conclusion, done well and led from the top with long term commitment, a social mission can help grow your brand with both consumers and employees. As Ben & Jerry’s CEO Matthew McCarthy observes, “Being part of something that’s bigger than just selling stuff has benefits for everyone involved.” (5) However, before you rush to emulate Ben & Jerry’s, take time to think through the role your social mission is going to play and ensure you are clear on what is needed to effectively deliver a social mission.