Will the Gillette brand purpose film get them growing again? (UPDATED)

Is Gillette’s new ‘brand purpose’ film, We Believe, “The worst marketing move of the whole year,” as Mark Ritson suggests (1), or an inspired bit of ‘culture-shaping’ communication?

The jury is split, based on the many Linked In comments I got on this post.  My own views have shifted as the week progressed and new research learning came out.

The film addresses the negative sides of masculinity (bullying, inappropriate touching in a meeting, wolf whistling at female passers by etc.). “It’s only by challenging ourselves to do more, that we can get closer to our best,” the ad says, in a reference to the brand’s long-standing slogan, ‘The Best a Man Can Get’.

The campaign has certainly created a lot of noise this week, gaining a whopping    20million views since being posted on YouTube    5 days ago (Sunday 13 Jan, 2019). The film has hit the news headlines, which fuelled more views, which has driven more headlines and so on and so on.

The film has also created high levels of social media feedback, with 8% of YouTube viewers clicking their reaction. This feedback has been negative, although less so as time as the week has progressed: the ratio of ‘thumbs down’ to ‘thumbs up’ has dropped from 7:1 to 4:1 to 2:1. Conspiracy theorists claim P&G has deleted negative comments. More likely, a broader audience has now viewed the film, promoted by the news stories, and so the feedback has become more balanced.

So, what lessons can we take about brand purpose from this campaign?

The first thing to clear up is the difference between social mission and brand purpose.

Part of delivering your brand purpose can involve a social dimension, like Gillette’s Believe campaign. But you can have a brand purpose that isn’t rooted in changing culture and society. “Purpose isn’t necessarily about saving the planet. It doesn’t have to be worthy per se; it can be about taking small and meaningful actions,” observed Stephan Loerke, MD of the World Federation of Advertisers.

Airbnb is a good example of a brand purpose with an emotional dimension, but where the focus is on improving everyday life: ‘To make people around the world feel like they can “belong anywhere.”’ As we posted on here, being more rooted in everyday life versus previous higher-order, societal issues has produced a mix that driven growth for Airbnb’s business and brand.

To really get Gillette growing again, and take share back from both own label and online insurgents like Dollar Shave Club, I suggest other ‘chapters’ of the brand’s marketing program need to focus on performance and innovation, not just the social mission.

This approach was used successfully by the Carling Black Label brand of beer we worked with in South Africa. This re-launch also involved a more contemporary vision of masculine achievement. In Carling’s case, this meant moving from reward for physical labour to a more multi-faceted view of masculinity and the different ways of being a ‘champion man’ (brother, friend, husband, father). One chapter did address a social mission, about being a ‘community champion’. But others chapters (below) focused on being ‘a champion beer’ and a global award winning mobile activation campaign, ‘Be a Champion Coach‘.

2. Root your purpose in your product

We suggest that brand purpose should be rooted in your product and here Gillette has missed a trick. The campaign has lots of emotional ‘sizzle’, but is light on product ‘sausage’. As Mark comments, “Among all the sanctimonious hectoring there is little room for any reference to shaving or Gillette.”

On the plus side, Gillette have stuck with long-standing slogan, ‘The Best a Man can Get‘, and seeked to update it by tapping into a more contemporary vision of masculinity. The film even uses clips from an old Gillette campaign to link back to the brand’s past.

But the campaign could have been better if the product had been cleverly integrated. As Julian Marsili of Carlsberg commented on my Linked In post, sons look to dads for advice on “shaving and behaving“. Why not portray some heartstring-pulling shared shaving moments, with dads teaching their sons about being ‘The best a man can be’ in today’s world?

Whilst I criticised Nike’s Kaepernick billboard last year for being about politics more than purpose, the ‘Dream Crazy‘ film is an example of blending emotion and product to deliver their purpose: ‘bringing inspiration and innovation to athletes.’ Nike’s products are central in the film, showing athletes who have overcome challenges to achieve success in the sporting arena.

The recent campaign about the ban of Serena William’s ‘catsuit’ is an even better product-centric example of Nike embracing controversy: “Our clothing is so damn effective, the tennis authorities had to ban it!” is the message. 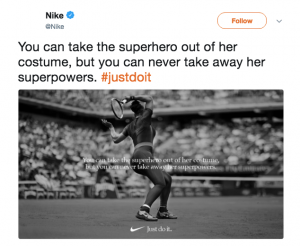 3. Social mission is about actions, not just words.

If you do decide to add a social dimension to your brand and shout about it, you need to back up your words with big, bold actions to be credible. And here Gillette falls short, at least based on their current actions.

First, the brand pledges to “actively challenge the stereotypes and expectations of what it means to be a man everywhere you see Gillette.” This is fine and good, and part of contemporary brand communication in tune with today, but hardly ground-breaking. Back in 2010 we posted here about the need for the Axe brand to evolve: “Is the style of humour of past its sell-by date: “laddish”, over the top, sexist, women as sex objects etc.“In 2016 Axe did indeed re-launch, with a much less laddish mix and the band idea ‘Find your Magic‘.

Second, “Gillette is committing to donate $1 million per year for the next three years to non-profit organizations designed to inspire, educate and help men become role models for the next generation.” This equates to 0.02% of Gillette’s $6billion turnover and feels frankly like a token gesture.

Putting a social mission at the heart of your brand requires much bigger and bolder actions to be credible in the long run. Patagonia’s purpose in anchored on the idea of ‘do no harm,’ for example. It is brought to life through big, bold initiatives like the Common Threads program. This encourages the repair, recycling and resale of garments via eBay. The brand even ran a full page ad saying: ‘Don’t buy this jacket unless you really need it.’ Here is a brand prepared to sacrifice short-term profit in the pursuit of a purpose with potential long term brand, business and societal benefits 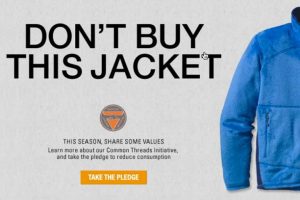 If you do decide to take a stance on a social issue, execution is everything. In addition to backing up your words with actions, you have to hit the right tonal chord, leaving people feeling inspired, energized and more likely to buy.

When I first wrote on Tuesday, Gillette seemed to have missed the mark. “We are not being shown the better path, we are being told we are all on the wrong one. It’s a poor way to sell razors. Hell, it’s a poor way to sell anything,” commented Mark in his column. The extremely negative social media reactions seemed to back up this view.

However,  System 1 revealed results from their US testing of the film (2) on Thursday, which made me stop and think again. The film got a 4-Star rating, putting it in the top 13% of ads tested, with 72% feeling positive emotions (happiness or surprise), 17% neutral and only 11% negative. The top reason for happiness was endorsement of the ad’s sentiment and praise for Gillette for being one of the first big brands to tackle it.

Why such a difference in emotional response versus the YouTube feedback quoted at the top of the post? “It’s possible that the haters  were more organised and quick to react and they weren’t representative of the likely wider response,” suggests Tom Ewing of System 1.

On reflection, the Gillette campaign is a good example of tapping into popular culture to refresh a long-standing brand idea with a social mission focused chapter. Despite hating certain bits of the execution (e.g. when the dad stops the boy play-fighting and says, “We don’t treat people like that!“) and a focus on the negative side of masculinity, System 1 testing suggests the campaign does have positive emotional impact with a broad audience. I do think future chapters need to better integrate the product, and the brand needs to back up their words with sustained actions to be credible.

The ultimate test is of course to see if the campaign helps Gillette SMS (sell more shaves), or whether Mark’s prognosis is correct, and the brand “has spent its own money to make its commercial situation less positive.”

To explore BRAND PURPOSE in depth we offer a short, on-demand course on our brandgym Academy platform here. The course is only £95+VAT and is fully refunded if you go on to take the full brandgym Mastering Brand Growth program where we explore a comprehensive and practical 8-step program for creating brand strategy to inspire business growth.

To get our latest research paper Making Purpose Pay, just pop your email in the form.

And to explore brand purpose further, see this earlier post on the Airbnb case study.