HAS Gillette’s social stand helped them grow? The CEO’s story

I hoped that last night’s British Brands Group lecture by Gillette CEO Gary Coombe would help answer the question from my January 19 post : Will Gillette’s ‘brand purpose’ film get them growing again? The talk, Should Brands Take a Stand?, was an entertaining and personal story about the rationale for and reaction to the brand’s controversial film, We Believe. Below I share what I took out  from the talk, which was rich in lessons on the risks and rewards of taking a social stand …. but light on hard data about the impact on brand growth.

1. Don’t be late to update your brand

Gary explained that Gillette was “gently slipping away” and in belated need of revitalisation. He confirmed the brand had lost share to competitors including insurgent direct-to-consumer (D2C) brands Dollar Shave Club (DSC) and Harry’s (I was hoping for up-to-date hard data on the decline, but this was not forthcoming; see old data below). 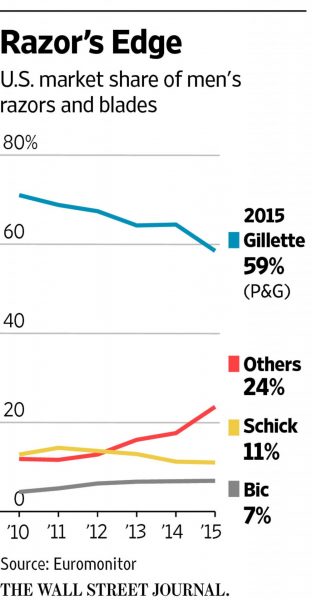 Failure to recruit younger users is normally a sign of a brand in decline. And Gary shared data (below) showing that Gillette does indeed suffer from having a lower brand share with Millennials (orange bars) vs the total population (blue bars). Gillette clearly needed to update its representation of masculinity, a similar challenge we worked on with Carling Black Label back in the late 2000’s. We also posted way back in 2000 on how the Axe brand’s ” ‘laddish’, over the top, sexists tyle of humour was past its sell-by date”.

Gary and the Gillette team believed that taking a social stand on ‘toxic masculinity’ would get the brand growing again and win back Millennials, based on data showing that 9/10 say a social mission makes them view a brand more positively, and 50% claim it would ‘influence’ their purchase decision.

2. Controversy can create exposure … and risks

We Believe is a rare winner of what I call the ‘viral lottery’, with 31 million YouTube views and millions of dollars of free publicity. But beware of following in Gary’s footsteps. First, 98% of YouTube films get less than 100,000 views (3). Second, as Gary revealed, the sort of controversy that drove We Believe’s exposure brings some serious risks, including calls for you to be fired, or worse!

Initial YouTube comments for We Believe were extremely negative, with an initial 7:1 ratio of ‘thumbs down’ to ‘thumbs up’. Mark Ritson called it “The worst marketing move of the whole year” (1) and a Forbes article suggested it was “nothing short of an all-time marketing blunder” (2). The negative feedback prompted calls from shareholders and some advisers to take the film down, but Gary and the team decided to stay firm.

The upside of the negative comments was intensive media coverage … which in turn drove more online views and comments … which fuelled more media coverage, and so on. It was soon the nº 1 trending topic on Twitter and Gary ditched plans to invest in paid views for the film.

3. Look past the online haters

A key lesson from Gary’s story is the need to look past the online haters of such a social campaign. He revealed that the extremely negative You Tube comments were in fact driven by two far right political groups in the US, who used multiple You Tube identities and bots.

When the Gillette team evaluated the film themselves, results were more encouraging: 77%/84% of millennial men/women were positive or neutral and 65% of people claimed they’d be more likely to buy the brand. These positive results were confirmed by System 1 testing that I posted on, with a 4* rating putting the film in the top 13% of ads tested and 72% feeling positive emotions. 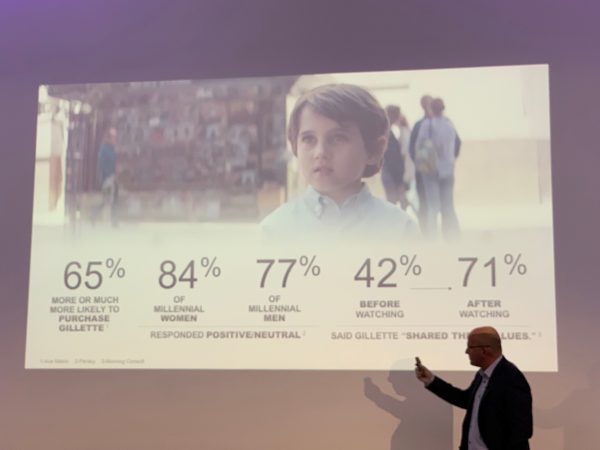 3. Tap into the TRIANGLE of truth

I was disappointed that Gary shared no hard data on the actual in-market impact of the campaign. “Our direct to consumer sales built and US share is growing for the first time in a while,” was as far as he went.

I remain convinced that Gillette would get the best results by linking the cultural truth about changing views on masculinity to two other sources of truth in what we call ‘The Triangle of Truth’ (example below):

We Believe does link to the brand’s long-standing slogan, ‘The Best a Man can Get‘. However, I still think the brand’s role in the delivering the best shaving experience could have been better captured. “Sons look to dads for advice on shaving and behaving. Why not portray some heartstring-pulling shared shaving moments, with dads teaching their sons about being ‘The best a man can be’ in today’s world?” I asked in the January blogpost. Maybe Gary and the team read the blogpost, based on the new film he showed  called Samson that does just this, again in a provocative way, featuring a young transgender man learning to shave. 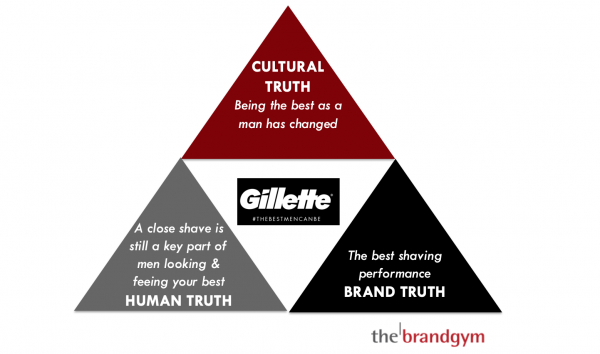 One key thing missing from Gary’s talk was any data proving that the growth of DSC and Harry’s and had anything to do them touting a social mission. Rather, three key things seem to have driven their growth, as covered in this post: i. distinctive, irreverent  communication, ii. aggressive low pricing and iii. the convenience of a D2C model.

We Believe was the first step in addressing the need for distinctive communication. And the brand belatedly started tackling the other two more fundamental challenges. It cut prices by 12% in 2017 in an attempt to re-set the value equation vs. the D2C brands and own label and has launching its own D2C service. Sustained action on innovation and renovation across the whole business will be needed to really reverse the negative trend.

5. Gillette’s social stand IS about words more than action

I asked Gary a question last night about a point from my January post regarding Gillette’s commitment to back up the words of We Believe with big, bold actions. I challenged him on the fact that Gillette’s $1 million/year donation to relevant non-profits equated to a mere 0.02% of Gillette’s $6billion turnover. His answer that the $1million a year was a big contribution, confirmed my impression that Gillette’s ‘social stand’ is about communication more than action. As Gary said, the brand spends $1billion a year on advertising, 1,000 times more than its spending on social action.

Putting a social mission at the heart of your brand requires much bigger and bolder actions to be credible in the long run, I suggest. Patagonia turns the idea of ‘do no harm’ into action with big, bold initiatives like the Common Threads program. This encourages the repair, recycling and resale of garments via eBay. And innocent smoothies give 10% of profit every year to charities. These are brands prepared to sacrifice short-term profit in the pursuit of a social mission with potential long term brand, business and societal benefits

Net, Gary’s talk showed that a controversial film like We Believe Gillette can get people talking about an important societal issue, and get big brand exposure IF it’s one of the 0.33% of films that win the viral lottery and get 1million+ YouTube views. He also confirmed the need to test with a broader sample to avoid mistakingly taking overly negative YouTube comments at face value, as many observers did with We Believe.

That said, I still believe a better approach is combining cultural, human and brand truths to create distinctive marketing that touches a nerve and gets talked about, by inspiring people, rather than dwelling on the negative. A good example is Nike’s women’s World Cup campaign that we posted on recently here. The ‘Dream Further’ film topped System 1’s chart of all World Cup ads, with a ‘near perfect’ 4.6 star rating. It was less negative, less controversial and got fewer views than We Believe. But what the campaign did do is help Nike sell more stuff, which is the main role of marketing: more US women’s shirts have been sold on Nike.com than any other football shirt. We need more time and more data than Gary shared to understand whether’s Gillette’s approach can match these sorts of results.

P.S. I came across an interesting film from Egard watches created as ‘a response to Gillette, called What is a Man. The film is ‘dedicated to all those who sacrifice everything to make the world safer and better for all of us’, and is an example of a more inspiring route that Gillette could have taken. Interestingly, the film is also in the top 0.33% of YouTube films with 4.5 million views, and a positive/negative ratio of 56:1, versus We Believe which is now has a positive/negative ratio of 1:2.