Rejuvenating the Royal Enfield brand from the ‘inside-out’

Royal Enfield (RE) is a great example of a company successfully addressing one of the biggest challenges in marketing: rejuvenating a brand in trouble. Back in 2000, the Indian-based RE motorbike business was loss-making and in real danger of going under, with monthly sales languishing at 2,000 versus a capacity of 6,000. Since then, the brand has grown a staggering 30-fold, turning it into an urban phenomenon in India.

To achieve this brand turnaround, the team used an approach we call ‘inside-out’. They had to dig deep, really deep, inside themselves to find the brand’s inner meaning, agonizing about what really mattered to them. The team had to then look outside to match this brand truth with a human truth, as we explore below.

Back in the early 2000’s RE was seen as an iconic brand with a strong heritage.  But there were many complaints regarding quality (e.g. engine seizure, snapped clutch cables, oil leakages). The bikes were also heavy to handle and had the gear lever positioned on the right side, whereas other bikes have it on the left.

The first step, therefore, in the brand rejuvenation was to fix the product fundamentals: no amount of emotional ‘sizzle’ makes up for an unreliable product ‘sausage’. In particular, investment was made in a modern aluminium engine. This new engine had 30% less parts and 30% more power with better fuel efficiency. The gear lever was moved to the left side. This change was opposed by diehard fans, but the company had to focus on driving penetration by recruiting new users

Looking inside and digging deep into the RE brand highlighted a series of potentially potent ‘brand truths’. The bikes had an authentic, rugged look uncomplicated by adornment or fancy design. Key features included the recognizable design of the headlamp and petrol tank. Enthusiastic riders described the bike’s design as ‘naked’, almost as if was an organic extension of the rider himself and his ‘inner-ness’. The RE experience was centred on the rider and how he engaged with the bike and other riders.

The idea of a rugged bike built for voyages of self-discovery was perhaps best captured in the Himalayan model, specially built for exploring the mountain range of the same name. It had strong low-end torque to clear obstacles, and wide usable power to suit variety of terrains and conditions.

A needstate map of the Indian motorcylce market back in the mid 2000’s highlighted a growth in more expressive needs: ‘Potency’ and ‘Liberation’ (upper part of the map below). Importantly, these needs accounted for only 15% of actual market share at the time: market supply from brands lagged the ‘desire’ of consumers.

Potency celebrated power, domination & an overt display of masculinity. The team felt this space was already quite competitive. Pulsar was the dominant brand, standing for ‘the thrill of the ride’. Two other brands also attacked this space on the promise of their racing pedigree – a local player Apache and KTM from Austria.

Liberation represented the need for expression by breaking free from the mundane, often in the company of like-minded friends. This space was not only large, it was also pretty much uncontested. And importantly, the need for liberation fitted well with the brand truth about a bike focused on the rider’s self-expression and exploration. 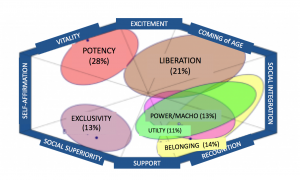 3. Pinning down the positioning

The brand positioning was summarised with the idea: “Masculinity, viscerally experienced.” Brand values were crafted to help the team ‘walk the brand talk’ every day, both internally with employees and externally with consumers, including:

– Hands-On: Engage spiritedly with the bike, with rides, with the community of bikers.

–Inner ‘Thump’: Kick-start a lifelong lust for the most authentic physical experiences.

The brand positioning inspired and guided the team to create a distinctive marketing mix, with a series of critical choices:

– prioritizing the role of gut over mind

– focusing on presence in the moment over presentation and showing off

You can see this approach in the advertising below. This tells the story of an ad agency executive who inherited a RE bike, rode off to the Himalayas on a voyage of exploration, opened a mountain lodge and never came back.

Of course, many or even most RE owners may use their bikes for more mundane, day-to-day riding but still enjoy the feeling of riding a rugged, authentic bike associated with liberation and adventure.

The brand has also created a ‘replicable’ activation property that has been running for a number of years: The Moto Himalaya.  This is “A pursuit for riders to meet their adventure quotient by riding across some of the highest motorable passes and traversing through pristine lakes in the mountains or merely camping under starlit skies in the Himalayan ranges,” according to the brand’s website.

In conclusion, Royal Enfield is a great example of how to rejuvenate a brand from the inside-out, digging deep to discover authentic brand truths and matching these with human needs.