Two examples of brands dropping characters from campaigns grabbed my attention this week. Direct Line killed off the Winston Wolf campaign, a masterclass in using ‘fresh consistency’ to boost effectiveness, driving brand and business growth over five years from 2015, as we posted on here. The Wolf character has been replaced by a bunch of superheroes, including RoboCop and Bumblebee from the Transformers movie.

Birds Eye seems to have thrown even more equity overboard. The bearded, sea-faring captain that has championed the brand’s fishfingers for 53 years has walked the plank, replaced by Captain Charlotte, the winner of a campaign with retailer Iceland to find a ‘Frozen Food Hero’.

I suggest below why both brands both risk wasting valuable brand equity. 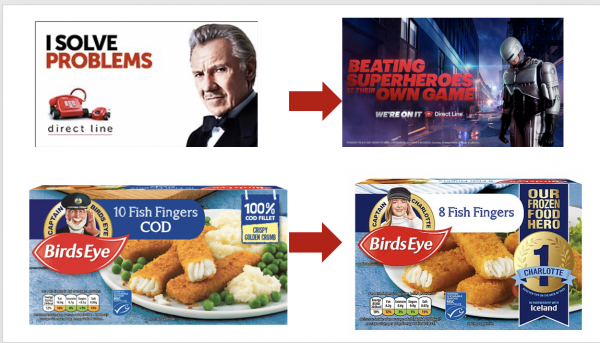 We’ve posted many times on the power of brand properties (logos, colours, characters etc.) to trigger both brand recall and brand meaning. Campaigns featuring visual and audio properties are 34% more likely to be high performing, according to research by IPOS on 2,000+ pieces of video creative (1). When used consistently over multiple years, brand properties create ‘memory structure’ that works as a ‘key’ to instantly unlock brand associations. 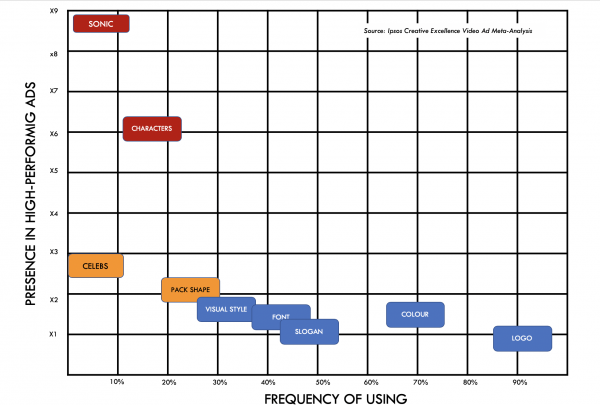 The challenge with brand characters, as with all brand properties, it to balance consistency, to build on and reinforce memory structures, with freshness to stay relevant for today. Captain Birds Eye is a perfect case of a brand team battling to get this balance right.

The first version lasted 21 years, before an ill-fated attempt move to a younger, clean-shaven, cooler looking Captain featuring Sex and the City star Thomas Pescod. The Captain is supposed to be an experienced, sea-farer who knows a thing or two about fish, and this younger version lacked credibility.

Consistency was restored from 2002 to 2016, with a silver-bearded Captain (though the 2016 version looks a bit old and out-dated). Then 2018 saw a re-launched Captain played by Riccardo Acerbi, an Italian actor and watersports enthusiast who grabbed the headlines for his sex appeal! This feels like the perfect balance of freshness and consistency. 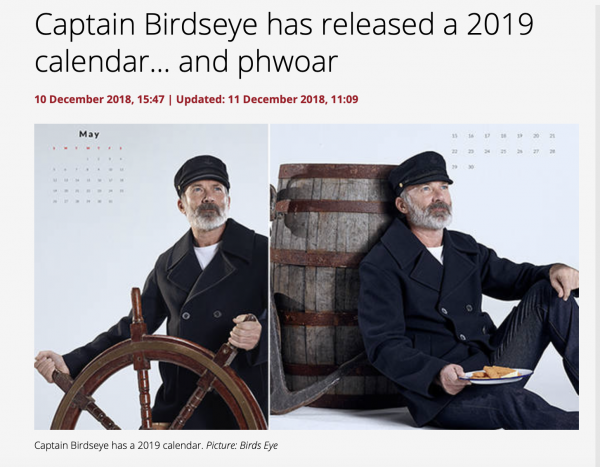 Given half a century of fresh consistency, the recent move to replace Captain Birds Eye with Captain Charlotte is a curious one. My 18 year old daughter for one thought it was a false step. “Captain Birds Eye is a character, and changing him like this feels a forced attempt to be topical!” Captain Charlotte lacks both some of the visual properties refreshed over 50+ years and the authority as an experienced sea farer sourcing the best fish. On the other hand, the brand does gain some topicality and news value, which the team clearly hopes offsets the loss of recognition and triggered brand associations. Also, the move is temporary and limited to one retailer.

I disagree for once with Mark Ritson, who suggests that Direct Line’s new approach “promises similar success, thanks to the team’s understanding of distinctive brand assets” (1).

Direct Line have, in effect, swapped from a character to a celebrity endorsement strategy, by using famous movie characters that can be used by other brands (see below). Celebrities are less than half as effective as characters according to the IPSOS study (2.84 vs. 6.0). “Winston Wolf was a character too!” You might protest. But Wolf was different, because the single film he appeared in, Pulp Fiction, came out 24 years before the Direct Line campaign started. Many of the brand’s target customers probably didn’t even know Wolf from Pulp Fiction, so he was in effect a true brand character. This is shown by a YouTube comment on one of Direct Line’s ads: “Has anyone else recently watched Pulp Fiction and a friend go ‘Ooh! It’s that the guy from the Direct Line advert!’”

Spotting a Direct Line poster with Winston Wolf instantly triggered the brand, whereas to my eyes the new bus posters (below) look both less clear and less distinctive. It looks like it could be a poster for a new Robocop movie. 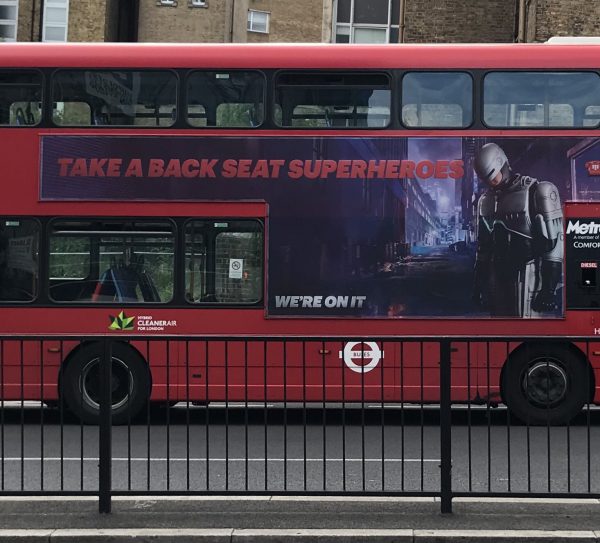 Furthermore, the superheroes steal the show in the TV campaign (below), in my view. The drama is on them and the fact that despite their spectacular, car-crushing chase to the scene (creating insurance claims, not sorting them?!) they are in fact NOT needed; the actual insurance product and brand come in later to show that Direct Line is ‘on it’. In contrast, the Wolf campaign used the character as a co-star with Direct Line customers to dramatise a compelling product benefit from the start.

Given all the advantages above, why are characters not more commonly used? I can suggest a couple of reasons. First, they require more creative effort than the quick-fix of paying a celebrity. And second, patience is needed to build memory structure: you have to ‘load’ the character with meaning, as opposed to trying to ‘borrow’ memory structure from a well-known celebrity.

Best of all is maybe a combination of the two most effective brand asset types: character and sonic device. Interestingly, the two brands featured here did just that in previous campaigns.

And the original Birds Eye adverts has a Captain Birds Eye song that UK readers of a certain age will find themselves singing along to.

In conclusion, brand characters are valuable brand assets that need to be carefully managed over time to balance freshness and consistency. We recommend that you treasure and measure your own brand assets, using a method such as the Iconic Asset Tracking (IcAT) we use on brandgym projects. The Magnum example below shows how the brand’s distinctive product visual (top right) was almost four times more effective the celebrity endorsement of Benicio Del Toro (bottom left) which cost the brand millions of dollars. 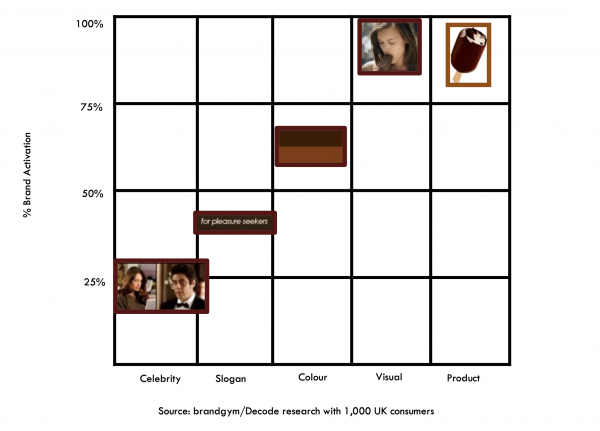