I had mixed emotions after last Saturday’s Rugby World Cup (RWC) Final in Japan. I was desperately disappointed by England’s defeat, but delighted that South African Springboks won, given my strong ties to the country from the 30+ projects I’ve done there. I was also happy that Castle Lager (part of my longest running S.A. client, AB Inbev) got brilliant bang for the bucks spent on their Boks sponsorship. Castle Lager’s campaign, Heartbeat of the Nation, is a brilliant example of ‘brand activation’, a much more effective way of building your brand and business than simply spending promotional money on price cutting.

By downloading the Castle Lager app, people could sync their heartbeat using a smart device or phone. The heartbeat of every participant was measured throughout each game, with all the data united to give the heartbeat of the nation as a whole. The emotions experienced and accompanying heart rate were then communicated via social media. As part of the campaign, Castle also offered to “buy the nation a beer” if the Springboks reached the final; you simply had to text a special code to get your free celebratory Castle. All of this activity has raised the profile of the brand, built distinctive memory structure and created emotional connection with Castle Lager.

Below we look at some of the learning from the Castle Lager campaign. 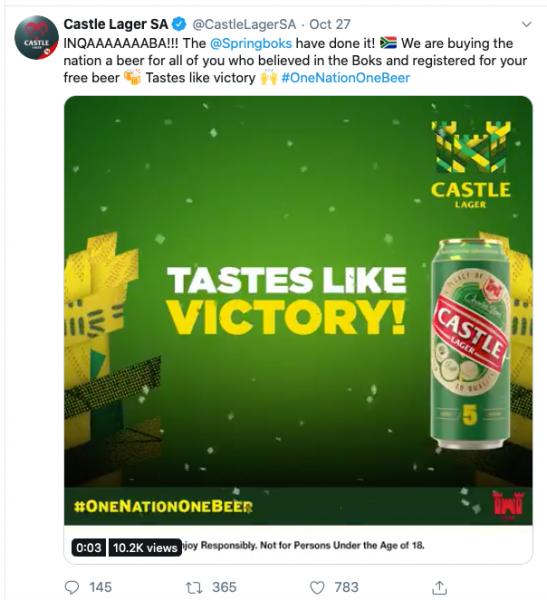 Castle Lager is a great example of using fresh consistency to build distinctive memory structure, having partnered with South African sport for over 20 years. Castle has consistently supported not one but all three national sports teams: Springboks (rugby), Proteas (cricket) and Bafana Bafana (soccer). Freshness has come from multiple ‘chapters’ of marketing activity linked to key sporting occasions, such as the Rugby World Cup.

A tweet from TV presenter Thomas Mlambo before the final (below) shows the power of memory structure. Thomas tweeted about the emotions triggered by re-watching a classic Castle Lager ad from 1999, sharing the film, his hopes for a Boks victory and the Castle Lager hashtag. This is another example of ‘influencer advocacy’ we posted on here, where famous people promote a brand out of product passion, not payment. In this case, Thomas boosted Castle’s social reach by almost 200%: 579k followers vs. 28k for Castle Lager. 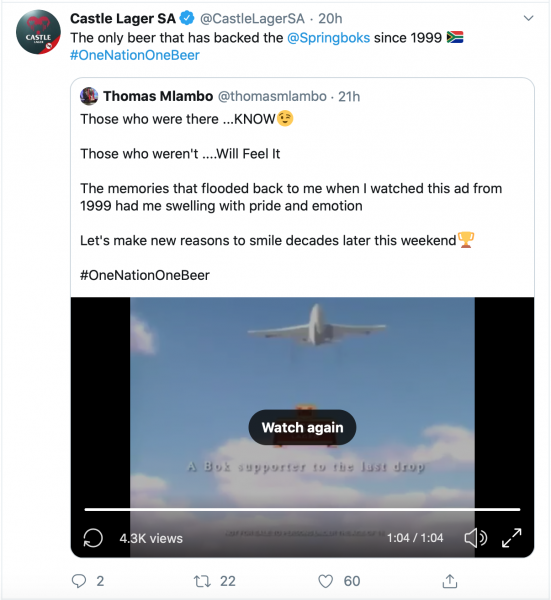 The film shows a group of friends setting up a braai (barbecue) near the airport, watching a replay of the Boks’ World Cup Final win in 1995 as a jumbo jet flew over them, recalling the famous flyover that took place before that victorious match.You can watch the iconic film below.

Castle Lager’s long running sponsorship of S.A.’s national sports teams goes way beyond the ‘logo slapping’ of some sports marketing, where brands simply add their name to a team or event. Castle Lager has always focused on the shared experience of the ‘Superfans’ who come together to support the team, rather than reverential worship of the heroes on the field, as captured in the brand’s social media hashtag #OneNationOneBeer.

This approach makes the brand’s marketing distinctive and also adds emotional ‘sizzle’, by tapping into and amplifying the feelings fans get from collectively experience sporting event. This is summed up in the slogan the brand used for many years: ‘It all comes together with a Castle’ (great friends, great beer, great brai, great sport etc.).

Below is an activation campaign from 2013 that we worked on with the Castle Lager team, bringing to life the Superfans idea by harnessesing the ‘triple-whammy’ of national teams sponsorship. The ‘Superfans Weekend’ allowed fans to see all three national teams (soccer, rugby, cricket) play over one single weekend. Note how the focus is on the fans. When Springbok stars do appear towards the end, they are not separate from them, but rather carrying one of the exhausted Superfans into the stadium!

Castle Lager does a good job of combining emotional sizzle AND product ‘sausage’. The emotional focus is on bringing people and even the whole nation together around a Castle Lager. The product story is also about bringing together the best of South Africa, this time in terms of product ingredients. The brand uses the idea of ‘Homegrown’ to talk about this product story, which has a lovely parallel with the idea of homegrown talent in the Springbok’s world cup winning team, as exemplified by captain Siya Kolisi.

Brand activation should build the brand, but also build the business, with a clear link to the product category and usage occasion. And the Castle Lager Rugby World Cup campaign does this well. The brand team created a supporters jersey inspired by six iconic victories by South African teams in the three sports Castle Lager supports. The jersey was not available to buy, and could only be obtained by buying one of the special, limited edition packs featuring the same six sporting moments. The advantage of this promotional item is the boost to brand visibility it created, with many fans featured on TV and online wearing the jersey.

In conclusion, the Rugby World Cup campaign is one in a long line of Castle Lager programs showing how smart brand activation can help build long term brand equity and drive short term sales. I look forward to see what Castle Lager has in mind for the 2021 tour by the British and Irish Lions rugby team, but hope for some revenge in the form of a Lions’ series win!