How to create a new category like White Claw

As I read the Nielsen Bases US Innovation List for 2019 White Claw, a hard seltzer launched in 2017, really stood out. The Nielsen report identifies which of the 30,000 products launched each year in the US (that’s one every two minutes!) are truly incremental and have longevity. White Claw fits Nielsen’s ‘Superstar’ category, achieving Year 1 sales of over $50 million, and Year 2 sales that are at least 90% of Year 1’s.

White Claw has created a new sub-category within the alcoholic beverage market. At its simplest it’s an alcoholic version of the flavoured seltzers like La Croix and bubly that have boomed over the last decade. Sales have been very impressive, growing from $58 million in its launch year to $186 million in 2018 and $539 million in 2019, that’s a spectacular growth rate of +290%.

The five big lessons about creating a new category for me are:

White Claw taps into the consumer paradox of wanting something that is both healthy and indulgent that most food and drink companies fail to deliver upon. Positioned as ‘A Seltzer Made Pure’ it allows consumers to enjoy pure refreshment in a way that is neither very calorific (100 calories per can) nor intoxicating (only 5% alcohol), and with natural flavours.

White Claw’s can structure, pack graphics and flavour names are all consistent with the popular flavoured seltzer category. Freshness comes from adding alcohol, the ‘hard’ in hard seltzer. The harder edge is also cued by the name White Claw, compared to the softer names of seltzers like La Croix and bubly.

This fresh consistency means the consumer really doesn’t have to work that hard to understand that there is now an alcoholic version of something that is very familiar: what is called ‘fluent’ innovation.

White Claw launched with a visually distinctive black & white ad campaign that importantly cued the crashing wave symbol from the can; the name White Claw is inspired by a special type of wave created by three crests coming together. These distinctive assets have been used in all media, with investment concentrated on the fast awareness-building channels of TV and sampling. This single minded approach works to create mental availability, the first key driver of penetration for brand growth. 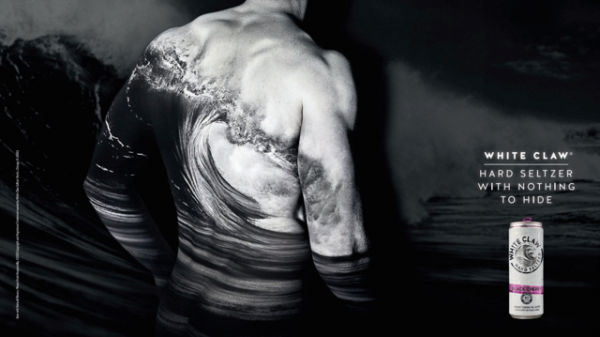 White Claw is unambiguously targeted to mass channels and merchandised exactly where you would intuitively expect to find it, merchandised adjacent to craft beers, ciders and flavoured malt beverages. By driving distribution in this way White Claw is maximising its physical availability, the second key driver of penetration for brand growth

Without knowing the financial details of White Claw’s P&L, I suspect that they have made a healthy gross margin from Day 1. The packaging and product materials are simple and cheap, canning capacity is readily available as soft drink consumption declines and the pricing strategy seems smart. A 12 pack sells for about $15 which is about the same as a 12 pack of domestic light beer.

As we start a new decade and hope that our innovations cut through the tens of thousands that are launched each year White Claw serves as a lesson in creating a completely new category but doing it in a way that is simple, smart and sustainable.