Coca-Cola’s ‘Signature Mixers’ launch is a bold move that has provoked some debate at the brandgym. Will it be a hit or a miss? Here we look at the points that could influence the chances of success. 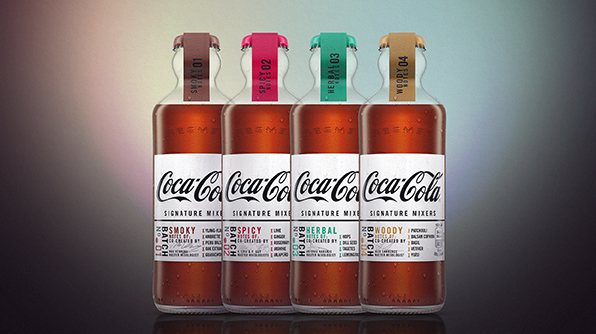 In principle, this core range extension has the potential to deliver a ‘double whammy’: increased penetration, both on and off trade, and superior profitability.

Increased penetration should come by Coke upping its presence in the alcoholic drinks space. It takes advantage of the growth of dark spirits like rum (1), following in the wake of the global gin phenomenon. In this way Coke is ‘riding the wave’ of these categories and seeking to position itself as the idea mixer.

In particular, the Signature Mixers could make Coke’s offer more aspirational in the ‘on trade’ (bars, clubs, cafés), with the new flavour profiles having been co-created by some of the World’s top master mixologists, such as ‘Max Venning’ and ‘Antonio Naranjo’.

The products certainly seem pretty good, based on testing at a Gore family gathering with a cocktail of Gen X, Millennials and Gen Z. On taste, it’s Coca-Cola as we know and love it, but with intriguing new twists in the tail. The ‘Smoky’ and ‘Spicy’ variants definitely enhanced dark rum over and above normal Coca-Cola and jalapeños helped deliver the ‘Spicy’ one. However, there was perhaps too many dill seeds in the ‘Herbal’ one, which reminded us too much of eating smoked salmon!

Superior profitability should come from the premium pricing. A common mistake of range extension is to offer new features and benefits, but not price up to recoup the extra cost and generate some extra gross margin. Coke have not fallen into this trap, being bold in their pricing: Signature Mixers are almost 250% more expensive on a per ml basis (3) vs Coke Classic (see ranges on shelf in Waitrose below).

Two potential challenges have come up during our debate about the Signature Mixers.

First, is Coca-Cola failing to harness one of the brand’s most potent and distinctive properties by choosing to launch in the earlier ‘Hutchinson’ straight-sided bottle (2)? By not utilising the iconic ‘Contour’ bottle shape, which I posted on recently here, are the Coke team missing the opportunity to cement the brand’s position as the World’s number one mixer with a very distinctive visual equity, especially in dark bars and clubs?

Second, the new range does come across as overly complicated in both design and recipes, whereas the Coca-Cola brand has always delivered effectively on the ‘less is more’ design principle. The ingredients list is perhaps too long and lacks logic (e.g. ‘oak extract’ in the Smoky mixer rather than the Woody one, and ‘rosemary’ in Spicy rather than Herbal). The paper labels over the caps are also unnecessary and prone to damage.

Finally, the launch of Signature Mixers, and also Coca-Cola ENERGY, stretches Coke’s ‘brand elastic’ quite far, in terms of both core competences and brand personality. And recent attempts to extend the core have had mixed results, with Coca-Cola Life and Coca-Cola Cherry both being discontinued (although some ‘limited edition’ flavour variants remain). Signature Mixers are interesting and intriguing, but is Coke a credible brand to launch them with? 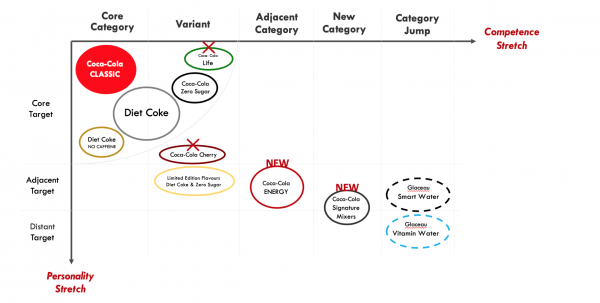 In conclusion, whilst extending the core can deliver both increased penetration and superior profitability, try to harness and build on your existing visual equities to have the best chances of success. And evaluate the degree of stretch from the core of any extension to check the brand can credibly stretch.

Simon Gore
Please choose a color:
Recent Posts
Categories
In line with the General Data Protection Regulation, we have updated our Privacy Policy which now provides complete transparency about the ways in which we process your personal data. Our new fully GDPR compliant Privacy Policy is accessible here.