BA’s World Cup ad: big brands can be agile too

Big brands get a lot of stick for being slow and cumbersome compared to smaller ‘insurgent’ brands. But British Airways (BA) show how big brands can be agile, with their brilliant guerrilla-style ad about England’s World Cup progress (which unfortunately for England fans ended the Semi-Final).

The ad (below) appeared in last Saturday’s Times, the day of England’s World Cup quarter final vs Sweden. The BA and Ogilvy UK team had only a few days to make this happen, as the team’s place in this game was confirmed only three days before. 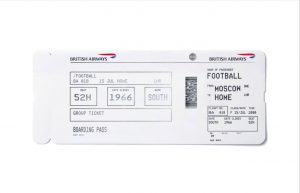 Here’s why I love this ad.

The BA ad cleverly taps into popular culture by making reference to a line, ‘Football’s coming home’, from a song called ‘3 Lions’, first released during the 1996 European Championship. ‘Coming home’ had a literal meaning, as the tournament was hosted in England, but also referred to hopes of a trophy coming home, 30 years after England’s first and only world cup win.

Fast forward 22 years and the song has become popular again, topping the charts and having over 14 million views on YouTube. The phrase Football’s Coming Home has been picked up by newspapers, websites, TV shows and even train services (below). 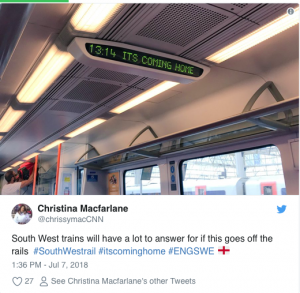 Its one thing to have the idea of riding the wave of world cup fever. But you then need excellent execution, which the BA ad has in my view. It is full of clever details that make you smile, and make you want to share it:

3. Bakes in the brand

The genius of the ad is the way the brand is ‘baked in’, via the use of a BA boarding pass. At a simple level, this reminds you about BA as an  airline. At a deeper, more subliminal level, it associates BA with the progress of the England football team. The next time I fly BA and get my boarding pass, it might trigger a positive world cup memory and make me feel good.

BA is not an official sponsor of the World Cup, or even the official airline of the England team. Yet they have managed to tap into the feel-good vibe around the team, by cleverly referring to dreams of  winning the World Cup, but without any direct reference to the tournament.

In conclusion, well done to BA and Ogilvy UK for showing how a big brand can be responsive and create distinctive, emotionally engaging and on-brand marketing, at speed.