Why you should be experimenting with “short form video”

I recently read an interesting piece in Marketing about "Short-form video". This is something I think brands should be looking at closely and starting to experiment with, as it is increasingly the way that (*buzzword alert*) Gen Z consumers are consuming media. One of the Collider companies I'm investing in is an agency called Burst who specialise in the creation and measurement of short form video.

Gen Z, aka today's teenagers, have what seems to be ever-shortening attention spans owing to the flood of messages, images and media they are bombarded with. And whilst I think from a broader cultural standpoint this trend is pretty depressing, that's the reality of the world we live in.

[Of course, like most of marketing today, this isn't really new at all. Vine, Instagram and Snapchat have "captured the imagination of today’s youth by purposefully limiting video length to between six and 15 seconds", in the words of the article's author, Max Pepe, head of Clockwork7. I created a pretty effective "short form video" for the launch of Clearasil Gel, "to connect with the Gen Z" of my day. The only difference was that back in 1989, more than a quarter of a century ago, we called it "a 10 second TV ad for 12-24 year olds"]

What is short form video?

Vine is the most famous short-form video platform. The clips are only six seconds long, and they "loop", going round and round. Twitter  bought it in 2012 and it now has 40m+ global active users. This is small in comparison Facebook's billion+ users. But importantly over 65% of Vine's users are those elusive Gen Z'ers aged 15 to 20 and 32% of all US teenagers using Vine regularly. Instagram also now allows short videos of three to 15 seconds. And Snapchat "stories" are compilations of snaps posted over the course of one 24-hour period.

Below is a typical Vine video from Josh Peck, who is one of the "Top 10 Vine Stars of All Time", according to this article.

Why should brands bother?

Max suggests that, "This presents a gargantuan opportunity for advertisers to gain mass exposure, and build audiences through brand advocates." Now, I do think this is a little bit of an over statement; I'm not sure short form video is "a gargantuan opportunity". However, I do think that the appetite of today's teens for short form video is something brands should be paying attention to, as I expect the need for this sort of content will only get stronger. As Max explains, "This generation has a highly advanced filtering system to make thousands of micro-decisions. ‘Should I click, should I watch, should I share, should I like?’ This filter is an integral part of digital survival."

So, Its time to start experimenting with this format, I suggest. First, short form video is four times more likely to be shared than standard video. According to Max,  "Brands will get up to 400% more shares from their Vine videos than they will from standard branded videos". You can see this on Facebook, where short video is often the format shared on peoples' Facebook newsfeeds. Second, mastering the art of short form video will also become increasingly important as more advertising is done on YouTube and other video platforms. Brands need to get smarter in how they craft the skippable advert intros on YouTube, those initial sequences where it says "You can skip in 3, 2, 1 seconds". At the moment these tend to be simply and bluntly the first few seconds of the advert in question, whereas they could be a specially created introduction that encourages you to keep watching.

Branded content accounts for only 4% of the top 100 tracked Vines according to Clockwork7. It seems that brands are yet to crack the creative code of what makes short form video "click". Here are some suggestions on what brands should consider when creating short form video.

– Do you have a content stream?: the first challenge is one I've posted on many times about: consumers are just not that bothered about viewing and sharing the "content" of many day-to-day brands in mundane categories. However, if you are a brand like Red Bull or GoPro, you are more likely to have plenty of interesting content. Brands in categories where entertainment is key, such as beer, are also likely to have lots of content. 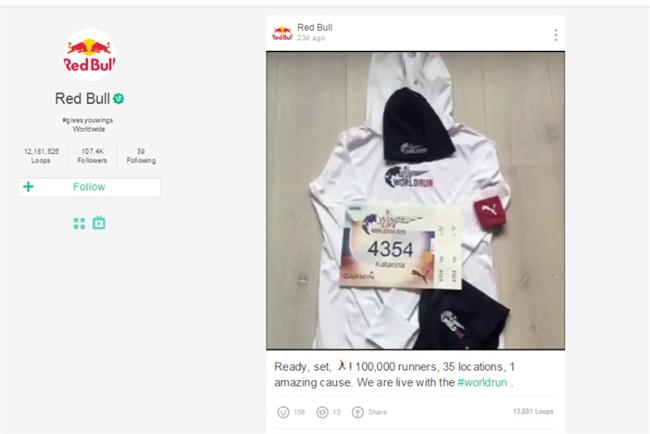 - Make it entertaining: in previous posts I suggested that three key things help a video go viral, and my guess is the same principle applies to short form video. The three magic ingredients are i. sex, ii. humour and iii. spectacle (something amazing). Below in the blog is an example of this from Chelsea FC which combines both humour and spectacle, and this magic mix has driven more than 3 million "loops" on Vine.

– Learn to be succinct: you might think only having to create six to 10 seconds of video makes the creative task easier. I would argue the task is just as hard if not harder. It's actually tough to create a video that is succinct, punchy and memorable. As Max says, "Brands must learn how to master this art and build an audience".

In conclusion, I suggest short form video is here to stay and will only get bigger, and its time for brands to start experimenting with it.