Interesting to read about a Gallup survey on social media in the Wall Street Journal, here. The Gallup report is titled “The Myth of Social Media”. It confirms several of the key points made in our own report published last year, “Can Social Media Show you the Money?”

1. Social media is for socialising

The Gallup report confirms our finding that social media is primarily for connecting with friends and family, not for connecting with brands. Given this fact, we recommend that social media is most appropriate for brands that have “social currency” and lots of interesting content to share (e.g. Red Bull, Manchester United, Lady Gaga), and less so for everyday consumer products such as toilet roll and pasta sauce.

Almost 2/3 of people surveyed said that social media had NO influence on what they buy. A further 30% said it had some influence. But only 5% said it had a great deal of influence. Admittedly, these are claimed figures, and we need more evidence on actual purchase habits based on tracking consumers over time to better understand this.

3. Reach is being edged down

I’ve been posting for over a year on the issue of “edge rank”. If you are investing time and effort on facebook content, I hope you read the posts! Edge rank decides which of your posts to put in your followers’ newsfeeds, based on several criteria including relevance and popularity.

As the WSJ article reports, Facebook’s use of this process means that only a minority of your posted content actually gets to your followers: “Brands reached 6.5% of their fans with Facebook posts in March 2014, down from 16% in February 2012”. In other words, 93.5% of your Facebook followers do NOT see that lovely content you are posting. The results are worse for brands with a big following of 500,000+: reach was a paltry 2%! (see data below from Social@Ogilvy) 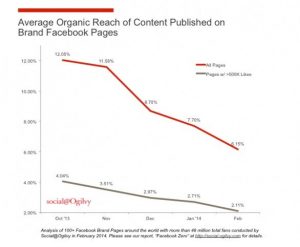 The Gallup survey confirms our finding (below) that Facebook fans are mainly existing users: “These channels do not motivate prospective customers to consider trying a brand or recommending a brand to others.”  And, as we’ve posted on many times, the key to brand growth is driving penetration by bringing in new consumers. In conclusion, the Gallup survey is one more pebble thrown into the ocean of hype around social media. Let’s see how bog the ripples become over the next year or so.