I recently read about Audi and BBH winning the Grand Prix in 2018’s IPA Advertising Effectiveness Awards, for work including their Clowns campaign. What was the secret of their success, I wondered?

Emotional impact is often quoted as the key to effective advertising. However, emotion alone doesn’t explain the success of Audi’s Clowns campaign, nor the other Gold Medal winners, as shown in a WARC research report by Phil Barden of brandgym partner agency Decode (1).

“Emotional campaigns, particularly those generating fame/buzz effects, produce more long-term business effects than rational campaigns,” according to the IPA (2). Emotional response gets your attention, deepens processing of information and makes it more likely your communication is remembered, as Phil explains in his paper.

Decode’s testing (below) shows how Audi’s Clowns ad clearly performs well on emotional engagement, as do two other IPA Gold winners from the AA and The Army, over-indexing vs. Decode’s norm. Clowns scored highly on emotional measures including ‘happiness’, ‘joy’, ‘surprising’, ‘entertaining’ and ‘funny’. The beautiful casting, direction and production work together to create this emotional engagement.

So, is emotional appeal and getting shared like crazy on social enough for effective communication? 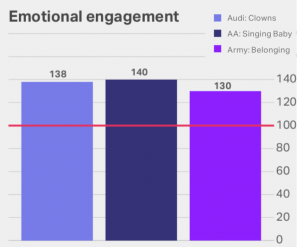 2. … but emotion alone in not enough

The risk with focusing on emotion alone is ‘sponsored entertainment’: emotionally arousing communication with bugger all link to the brand and product.

Take for example Budweiser’s 2015 SuperBowl Puppies ad. “We basically won the Super Bowl,” explains AB InBev’s US VP for Marketing in the Decode paper. “It had the most re-tweeted alcoholic beverage tweet ever, and the most likes on a Facebook post ever from an advertiser.” However, the same VP is quoted as saying, “They (the puppies) have zero impact on beer sales. Those ads I wouldn’t air again because they don’t sell beer.” 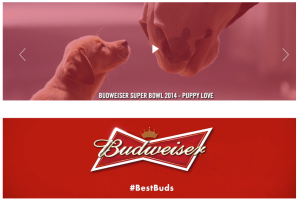 Emotional response is only part of the story.

Buying behaviour is actually driven by ‘motivation’: desires, goals and ‘jobs to be done’.

And here, the Audi Clowns ad also performs well (see below), by strongly activating the goal of ‘control’. “It uses clowns as a metaphor for all the idiots  on the road who create risks that Audi’s technology helps you avoid,” as Phil says. 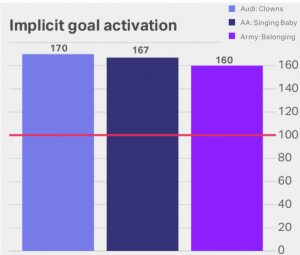 Control is relevant for the car category. It also builds on and reinforces Audi brand associations with technology, control and performance built over decades of consistent BBH communication with the tagline Vorsprung Durch Technik (Advancement through Technology).

In conclusion, Audi’s Clowns is a great example of combining emotional ‘sizzle’ and product ‘sausage’ to “dramatise a relevant, motivating message in an emotionally engaging way”:

Used an implicit methodology to quantify both emotional impact as well as associations with neuropsychological motivational ‘goals’, and some ‘system 2’ cognitive aspects. Representative sample of UK adults, controlled for prior ad exposure. Contact phil@decodemarketing.com if you’d like the full paper.